I should have devoted installment #38 (November 11) to the subject of guns. Then I could have called it NWN's ".38 Special." Yes, I know, I could have done it this week as well, as there's also a ".44 Special." Not too common these days, though. And since I know neither how to breed or nor how to shoot horses, I can't use ".45 Colt" next week either!

Probably my best bet would be to wait another six years, get permission to do an hour-long show on guns, and call it our ".357 Magnum."

So installment #44 is our Christmas Special, and let's not hear any cracks about shooting off my mouth!

Featured speaker is the late, great humorist, journalist, and Texas-liberal agitator, Molly Ivins (d. 2007). And to hear Molly inevitably is to hear about Texas--which is how my mind turned to the subject of guns & ammo in the first place. Who ever heard a story about Texas that didn't involve at least one gun? 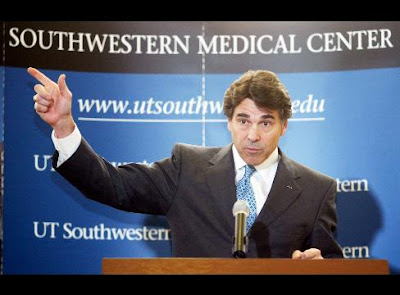 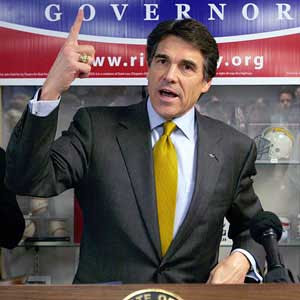 Texas Governor Rick "Goodhair" Perry. "That man has a head
of hair every Texan can be proud of, regardless of party."

This being modern Texas, though, the story has more religious nutcases than guns. People who believe that God is giving them special assignments. For instance: drive to Louisiana naked. With 16 naked neighbors. In the same car. (If you have to ask: Pontiac GTO.)

Or for instance: invade Iraq, bring the hajjis Christianity, democracy, and free-market capitalism, and let them pay for our help out of their oil revenues. 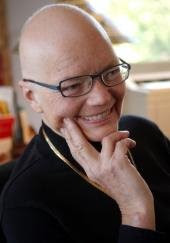 Looking in good spirits despite chemotherapy. Quite a contrast
to the Governor, though!--as she was in most other respects
as well as tonsorially. Molly died of breast cancer in 2007. 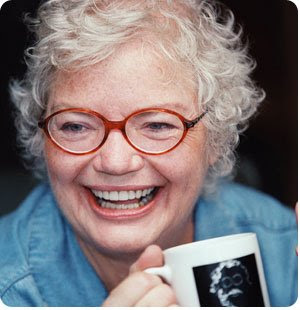 Molly--who is addressing an audience in Berkeley--also touches on California Governor Schwarzenegger (who looks like "a condom stuffed with walnuts"), Texas Governor Rick "Goodhair" Perry, and the Enron executive appointed as Texas State Utilities Commissioner--and driven out of office by the state's legion of small-game hunters. Plus musings on democracy in America and hard-earned advice from a Texas Liberal to left-wing activists everywhere: Have a good time now. Don't wait until you've won all the battles to make politics fun!

And next time you get special instructions from On High, make sure it's the real Lord who's speaking and not one of those damn' Lord Impersonators such as the one Crawford's Connecticut Cowboy has been listening to! 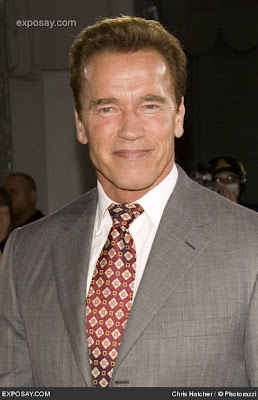 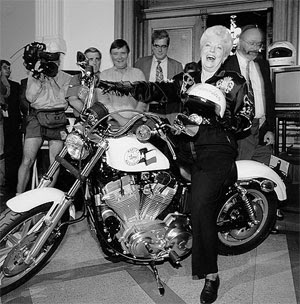 Ann Richards--Governor of Texas, 1991-1995; defeated for re-election by
W. Bush; died in 2006. Possibly the only politician in the state Molly ever
admired--apart from onetime Agriculture Commissioner Jim Hightower.
Here Richards tests the radical new motorcycle--the first ever designed
and built in Texas --the Alamoster 883, as Keith Olberman (rear)
scowls in approval.

But in our Christmas Special, it wouldn't do to let the Lord Impersonators have the only word about Higher Things, so the program features other voices too. Roy Zimmerman sings about "Jerry Falwell's God." Tom Lehrer sings about celebrating Christmas, American-style. And I offer a few words of praise for the man Ezra Pound (I think it was) appreciatively dubbed "Commander Carpenter." A.k.a. Jesus of Nazareth.

So happy Christmas, one and all! And if anyone happens to give you a Christian Bible as a Christmas present, see if it has a decent index. If it does, try looking up some topics, just to see if Jesus might ever have had anything interesting to say on the subject. Possibly, 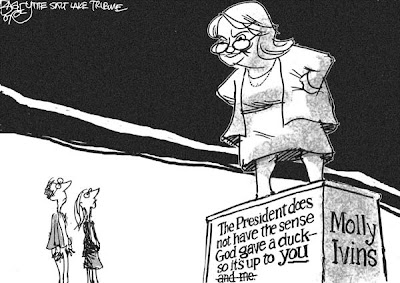 As the byline shows, Molly's wit and sanity are missed
well beyond the confines of Texas. Cartoon by Bagley.

Disclosure: A number of captious critics, some of them clad in leather jackets, have taken issue with certain points of the Ann Richards caption.