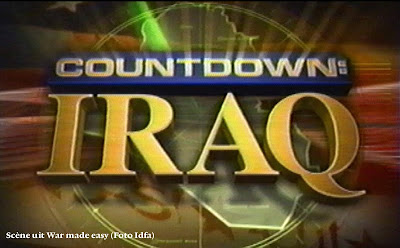 A fine documentary film from 2007--slightly condensed and adapted for radio by yours, truly.

The film shows how lies and propaganda from the government and the media persuade Americans to support an endless succession of unnecessary wars abroad. It features commentary by Norman Solomon and Sean Penn plus much TV footage from the 1960s through 2007.

The very same propaganda techniques used to get us and keep us mired in the Vietnam War are being used today to support the wars in Iraq, Afghanistan, and Pakistan--and to build support for near-future war with Iran. 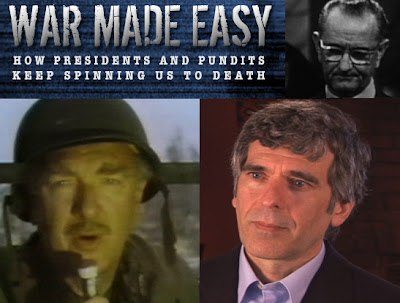 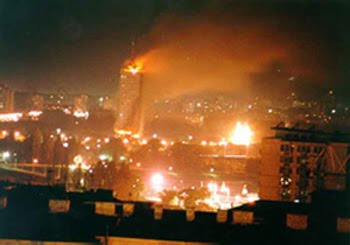 Top: (Clockwise from top:) Master liar and war propagandist Lyndon B.
Johnson; commentator Norman Solomon; famed newscaster Walter
Cronkite, on location, promoting the war in Vietnam.
Bottom: Belgrade, 1999, bombarded by US/NATO air forces. Americans
were told this was in order to protect the Muslims in Bosnia from the
ethnic Serbs in Bosnia. Senior U.S. official Strobe Talbott later admitted
that the real reason was to punish Serbia for attempting to chart an
independent economic course. Serbia had refused to join the World
Trade Organization and the European Union.
Most photos: Click to enlarge.

The video War Made Easy was produced by the Media Education Foundation. It is online at the Web site of the U.K. organization, Make Wars History. 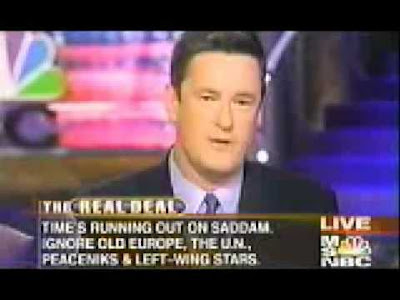 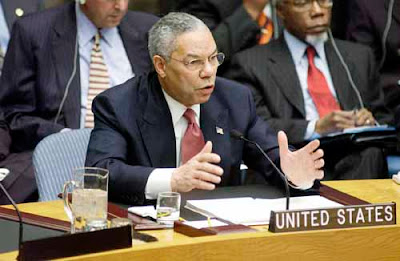 Bottom: Secretary of State Colin Powell, attempting to convince the
world that Iraq was awash in "weapons of mass destruction." The
foreign news media were skeptical, noting that Powell had presented
almost no real evidence for his claims. The U.S. media were practically
unanimous in praising Powell's "irrefutable," "masterful" presentation.
Remember?

Posted by Kenneth Dowst at 9:46 PM