Hannibal Lecter To Replace
Dodd in Senate,
or:
Psychopaths: An Introduction 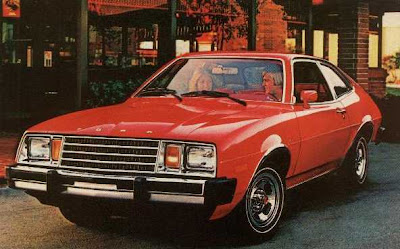 Psychopaths are quite common. Most are not hands-on killers. They differ from us in their lack of conscience, inability to imagine others' pain, and total lack of remorse for harm they cause. With these advantages, they rise to the top of hierarchies; and hierarchies become top-heavy with psychopaths. Which explains a good deal of U.S. domestic and foreign policy. Drs. Susan Rosenthal, Michael Parenti, K. Dowst--& redneck social commentator Joe Bageant--explore the implications. 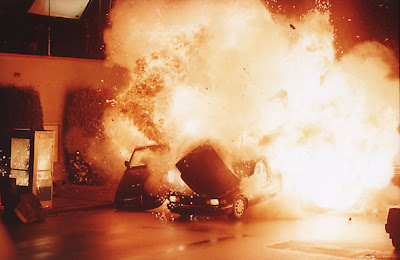 Pinto gas tanks would explode from a 28-mph bump on the rear, jamming
the doors and incinerating the occupants. Ford designed a fix that would
prevent this at a cost of $6 per car. Then Ford did the numbers, calculated
it would be cheaper to settle with the deceased's next-of-kin, and decided
not to employ the fix. Susan Rosenthal tells more, in this installment.
(Photo: skoblin, photobucket.com)

The passage by Dr. Susan Rosenthal is read by Lyn Gerry, rebroadcast from an installment of her Unwelcome Guests radio program (see link under "Worth a Look," in the gray sidebar; the URL is below). Thanks to Lyn & the Unwelcome Guests Collective.

The passage is from Chapter 2 of Rosenthal's 2006 book, Power and Powerlessness. The book is available--in some cases without charge--in 3 ways: (1) printed & bound, (2) by Internet download, (3) read aloud over several installments of "Unwelcome Guests."

The hour-long "Corbett Report" podcast has a couple of interesting installments on the same subject: #90 ("Our Leaders Are Psychopaths") & #113 ("Meet George Soros").

For more fun, see LA Weekly online's "12 Consumer Products That Should Not Have Exploded But Did: Recall-a-rama" (April 1, 2009). Of course they include the Pinto, a.k.a. "the barbecue that seats four."

New World Notes is produced under the auspices (Latin for "Freedom of Information Act") of WWUH-FM, a community service of that beacon of light in darkest Connecticut, the University of Hartford. Feedback to kdowst at hotmail period com. 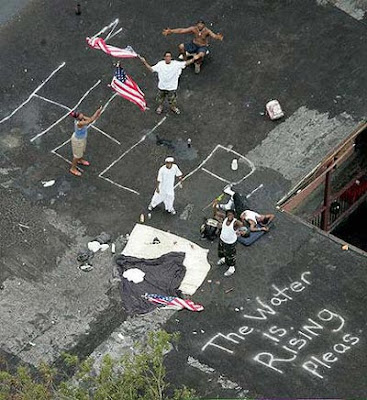 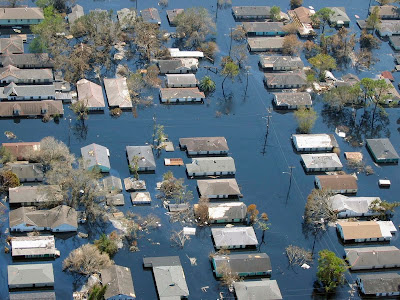 Top and bottom: New Orleans rooftops, 2005. The authorities knew the
flood was coming, did nothing to prevent it, and took no steps to evacuate
the (mostly poor and black) citizens. Somebody explain why ethnic
cleansing isn't the best term for what happened. Michael Parenti has
more to say on it, in this installment.

Did I mention that--for the first time in 32 years--New Orleans now will have
a white mayor? Scion of the statewide ruling-elite Landrieu family? Son of the
city's last white Mayor (Moon) and brother of a U.S. Senator (Mary)? Mitch
takes office on May 3, 2010, God willing. 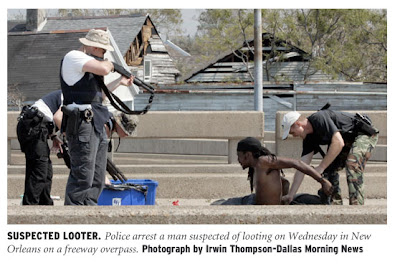 Semantics 101: In a disaster, white folks scavenge for food. Black folks
loot. No officials were available to help evacuate the city's poor & infirm.
Few were available to rescue the stranded; feed, clothe, & shelter the
victims; or provide medical care to the injured or ill. Plenty of officials
were available to protect property (already flood-damaged!) from
"looters." Incompetence? Or Heckuva job, Brownie! ?

Posted by Kenneth Dowst at 3:25 PM

I just discovered the show a few days ago and have been listening to 3+ hours a day. I was shocked that among all those who made the psychopath analogy you never mentioned the film "the corporation". I would be dumbfounded if you had never heard of it.

I've seen some of "The Corporation"--including Dr. Hare's good comments there on psychopathy--but not all of it. You're right: it's a good documentary indeed.

I'll have to watch it again. Thanks for mentioning it.