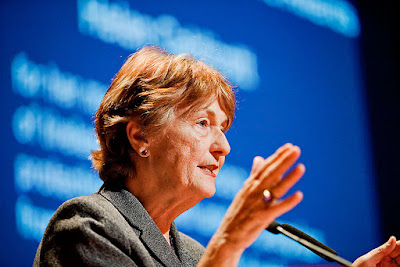 Out of sight out of mind; this talk by Helen Caldicott brought nuclear war/nuclear power out of subconscious thought and focused its horrors in my minds eye. I was also reminded the distress I felt when President Regan took down President Carters solar panels. But, I was also given hope from new thinking on how blacktop parking lots and rooftops could be reinvented with solar panel technology.

Thanks for the comments, Bill. Yes, that stunt of Reagan's--which was celebrated at the time by the corporate media and by many citizens too--has left a bad taste in my mouth then and ever since. On the plus side, now I am seeing solar panels on the occasional suburban house and on a good number of farm buildings.
-- Ken

Its the "many citizens" you mention that celebrate along with corporate media that confuses me. And solar panels commingling with parking lots and on rooftops makes so much sense, to me. But the "solar panel farms" that cover fertile farm land does not.

Bill,
(1) "Many citizens" indeed bought into the Reagan/Republican/capitalist ideology of unlimited natural resources, and they sneered at "tree-huggers" and their ilk. I think that's still the case today. A month ago I saw this bumper sticker on a big SUV: "Thanks for driving a hybrid. That leaves more gas for ME!"
(2) The rural photocell arrays were not covering prime farmland. They were on farm buildings and/or above-ground on posts. Here in New England, farms often include some land that is too hilly/rocky/etc. to be arable.