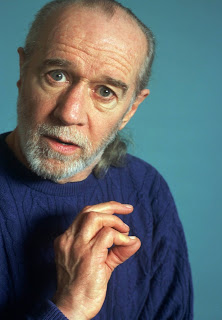 A little more restrained and more unified than Carlin's concert routines, the speech is packed with wit. humor. and Carlin's trademark iconoclasm.

It's a 3-part satire on the degradation of language in America. Carlin targets first the b.s. of politicians, then the euphemisms loved by most citizens, and then the "politically correct" language of liberals.

This talk--highly relevant today--now appears for the first time on New World Notes. I have slightly condensed the speech, shortening Carlin's introductory remarks.

New World Notes is produced under the auspices (Latin for "suspicious gaze") of WWUH-FM, a community service of that beacon of light in darkest Connecticut, the University of Hartford.