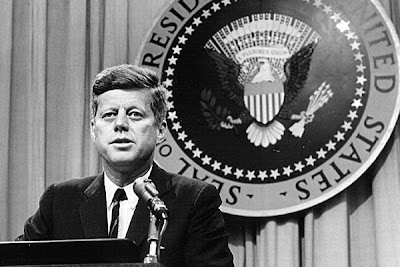 Kennedy addresses the nation during the Cuban Missile
Crisis, October 1962

Historian/peace activist Jim Douglass shows how--and why--President Kennedy "turned" from a Cold Warrior into a crusader for military disarmament. Douglass focuses on the Cuban Missile Crisis of 1962, which nearly touched off a nuclear war with the Soviet Union--a war that the Pentagon and the CIA very much wanted. Douglass also discusses--and we'll hear major excerpts from--one of the results of the crisis, John F. Kennedy's great "Peace" speech at American University, June 10, 1963.

This pair of shows was first broadcast in December 2008.

In the early 1960s almost the whole of the U.S. "national security state" (Pentagon, spy agencies, National Security Council) very much wanted war with the Soviet Union. We would win this nuclear war, they calculated, losing only 40 million lives, while the Soviet Union would lose perhaps 200 million and be destroyed. The U.S. would emerge as the world's sole superpower.

In October 1962, the CIA discovered a Russian-controlled nuclear-capable missile base in Cuba. The war-hawks immediately began shrieking that we must bomb the base. "Taking out" the base, they "reasoned," would have the additional good effect of starting the war with the Soviet Union that they so much wanted.

Only one American of any influence opposed the war-hawks: President John F. Kennedy. As he was on the brink of failing to prevent World War III, he begged for help from his nominal adversary--and secret pen-pal--Soviet Premier Nikita S. Khrushchev. Khrushchev very publically dismantled the Soviet bases in Cuba. 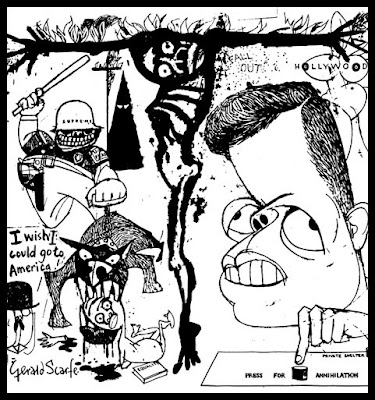 To many Europeans, the USA ca. 1961 looked less like Camelot than like
Hell's own lunatic asylum. Police brutality, racial strife, sexual license,
radioactive "fallout," and a President of dubious competence with his
finger on The Button: Gerald Scarfe was having none of it.

Afterwards, in a speech of June 10, 1963, Kennedy announced a bold reversal of U.S. policy. He announced military disarmament as desirable, attainable, and henceforth a policy goal of the U.S. Government. And he announced several steps in that direction, to be undertaken immediately, including the negotiation of a Nuclear Test-Ban Treaty with the Soviet Union.

The speech essentially called for an end to "the Cold War." The Military-Industrial Complex was not amused.

Few Americans have ever heard this amazing story. Or heard what Khruschchev called "the greatest speech by any American President since Roosevelt."

These two installments alternate between Jim Douglass' fascinating telling of the story and the June 10 speech itself--Kennedy's commencement address at American University.

PS: Within a year of Kennedy's great speech, the Powers That Be deposed Khrushchev and murdered Kennedy. 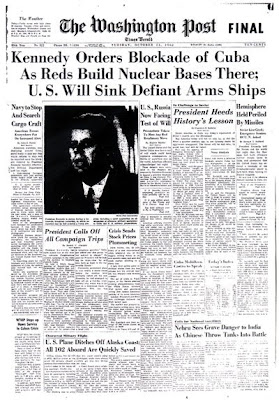 Douglass talk courtesy of Mike McCormick and Mind Over Matters.

Douglass is the author of JFK and the Unspeakable: Why He Died and Why It Matters.

The audio of Kennedy's complete speech is available as a free download from The Internet Archive.

For a brief, illustrated background-sketch of the geopolitical crises the Kennedy Administration had to face, please see my page, "The Story Behind the Greatest Speech You Never Heard."

New World Notes is produced under the auspices (Latin for "bad influence") of WWUH-FM, a community service of that beacon of light in darkest Connecticut, the University of Hartford.

Posted by Kenneth Dowst at 1:34 PM