Controlling the People (1): On the Job

Controlling the People (1):
On the Job

TV classic: Lucy and Ethel on the assembly line
at the chocolate factory. (Click on arrow to play).

This week we look at control of workers on the job. We focus on the system of Fredrick Winslow Taylor, the industrial efficiency expert who discovered how to improve productivity by de-skilling workers, reducing their power in the workplace, and assigning to each a very limited, repetitive task. Taylor, as much as Henry Ford, is the father of the modern workplace--offices as well as factories.

This is the first in an occasional series of programs on social control.

Top: Taylorism has shaped American offices as well as factories.
Bottom: Factory scene from a performance of The Pajama Game.
Most graphics: Click to enlarge.

Most of this week's audio was taken from the recent video documentary Human Resources (Metanoia Films). The complete, 2-hour video is available online. Thanks to Robin Upton and his program Unwelcome Guests for bringing this documentary to light.

Additional music this week from the musical comedy, The Pajama Game (first performed 1954): 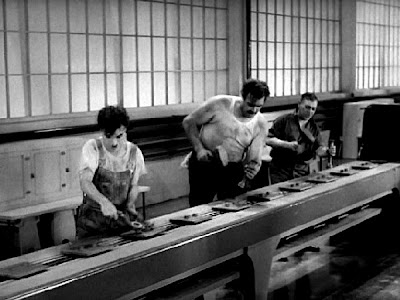 Posted by Kenneth Dowst at 7:20 PM