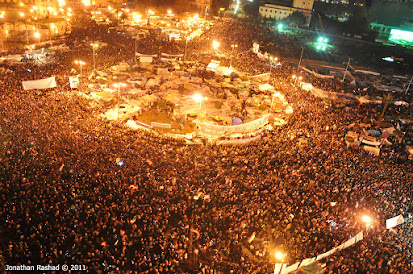 Tahrir Square, Cairo, December 19, 2011
(Click to enlarge.)
KD explores some popular nonviolent rebellions that nobody saw coming--such  as the "Arab Spring" and Occupy (both 2011)--and draws parallels to today's popular rebellion against the racist violence of police.
Then the young Howard Zinn, in a debate from 1971, argues that nonviolent mass protests have always been necessary in the U.S. to compel the System to change.
Zinn was defending in advance a massive protest against the Vietnam War, which was then being planned for Washington, DC, in May 1971. Zinn's eloquent defense of large-scale popular protests including civil disobedience illuminates the widespread "Black Lives Matter" demonstrations of our own time.
Plus one and a half relevant songs by David Rovics.
Posted by Kenneth Dowst at 2:20 PM