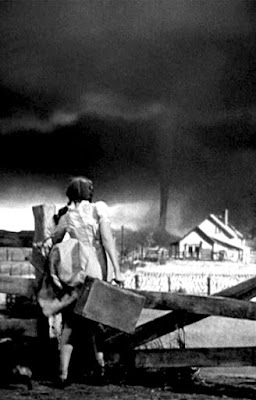 This week we celebrate not Shep the satirist and social critic but Shep the master storyteller. He tells of two tornados he witnessed: the first as a young teenager in the 1930s, the second as steel-mill worker in the 1940s.

The stories are fascinating and humorous accounts of one of the oddest and most unpredictable forces of nature. They are also a fine look at small-town life in the Depression-era Midwest and at life as a worker in a giant industrial plant. (The latter is scary enough even without the tornado.)

Complementing Shep's words are his inimitable vocal sound-effects and, here and there, his well-chosen background music.

Shep's 24+ minute narrative is taken, uncut and unedited, from his 45-minute radio broadcast on WOR-AM/FM of April 12, 1965. Original recording courtesy of Radio Veronica via radio4all.net.