Chris Hedges: The Algebra of Revolution 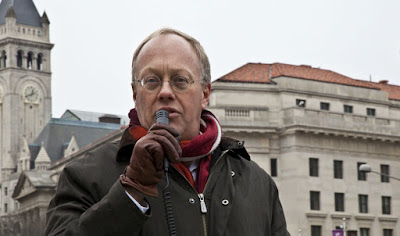 A new, hard-hitting speech by journalist/essayist Chris Hedges. It's about the corruption of "the System" ... the increasing power of "the one percent" ... the betrayal of the people by the Democratic and Republican parties ... the century-long crackdown on dissent ...

And it's about our increasingly meaningless national politics, in which our real and pressing problems (climate change, oligarchy, a plundered economy) are seldom even mentioned--let alone debated, let alone put to a vote.

Hedges devotes some particular attention to the three national candidates: Clinton, Sanders, and Trump. None of them advocates the sort of radical change that (to Hedges) is our only hope.

Hedges spoke in Seattle on April 25, 2016. Video recording courtesy of Pirate Radio Seattle. I have edited the soundtrack for radio broadcast.

Photo (above) by Justin Norman, Creative Commons licanse (by-cc). Thanks.