Not ALL Christians Are Evil!

Not ALL Christians Are Evil! 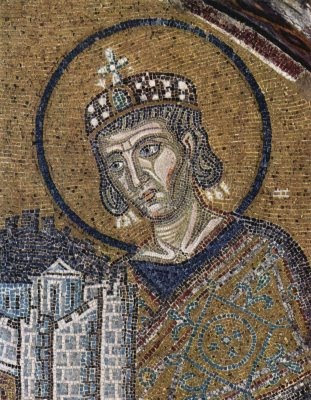 How to destroy a religion: Establish it as the official religion
of your empire, elect yourself Pope, then appoint the
bishops yourself. Worked for Constantine (shown), ca. 313.
Detail from mosaic at Hagia Sophia, Constantinople, ca. 1000.
Click graphics to enlarge.

Organized Religion (O.R.) has served Mammon & Mars well, while diverting its customers from virtuous thoughts & actions. ("Episcopal" does mean "overlook"!) What killed O.R. for me--by age 10--was the Required Weekly Perjury, a.k.a. reciting the "Apostles' Creed." A few Believers, though, actually try to enact the teachings of their religion's founders and thereby do much good in the world. We'll hear two speak: veteran CIA analyst Ray McGovern and Martin Luther King, Jr. (from the Riverside Church antiwar speech, April 4, 1967).

McGovern lucidly shows the oily roots of the Bush-Obama invasion of Afghanistan. Parts of his talk are funny--for instance when he recreates a discussion he had with a burgher of a rich Milwaukee suburb, on whether saving a dollar a gallon on gas is worth a half-dozen dead American soldiers a week. And on how many Commandments the State Department and Pentagon have broken by the time the gasoline reaches the pump.

Martin Luther King's hour-long speech contained, among other delights, a lucid history of the Vietnam conflict (not rebroadcast here), a fine discussion of how a Christian should respond to Communist revolutionaries, and a stirring denunciation of the Administration's policies of defunding programs that helped the poor ("both black and white") at home in order to pay for more bullets, napalm, bombs, and bombers to kill (primarily) innocent peasants abroad. Does any of this sound at all familiar?

One sign of the quality and power of King's speech: it was strongly denounced by almost all of the corporate-controlled American media. "Life magazine called the speech 'demagogic slander that sounded like a script for Radio Hanoi,' and The Washington Post declared that King had 'diminished his usefulness to his cause, his country, his people'" [Wikipedia].

New World Notes is produced under the auspices (Latin for "table") of WWUH-FM, a community service of that beacon of light in darkest Connecticut, the University of Hartford. Feedback to kdowst at hotmail period com.

Thanks to Seattle's Mike McCormick for the talk by Ray McGovern--which I yanked from a half-hour interview on Mike's radio program, Mind Over Matters (November 2009).

Owing to time constraints, only Christians reached the mic today. They don't hold the patent on virtue. Just to toss off a few names that come immediately to mind, let's acknowledge the faith-based good works of Jews Howard Zinn, Rabbi Michael Lerner, journalist Amira Haas, and the hundreds of "Refusers" in the Israeli military, among many others.

Moslems--apart from "terrorist suspects"--receive scant attention in America, but two that come immediately to mind are Malcolm X (see the final photo caption, below) and the Grand Ayatollah Sistani. The latter was responsible more than anybody for bringing to Iraq whatever measure of democracy it enjoys today--bringing it in the face of determined opposition by the U.S.-installed Coalition Provisional Authority, the Pentagon, the State Department, and the administration named after W Bush. 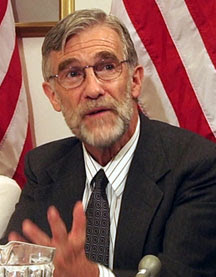 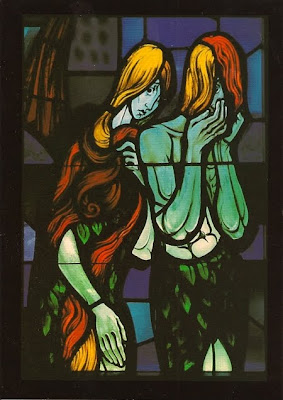 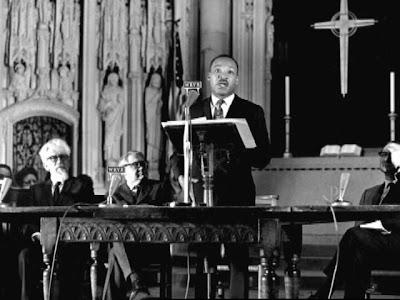 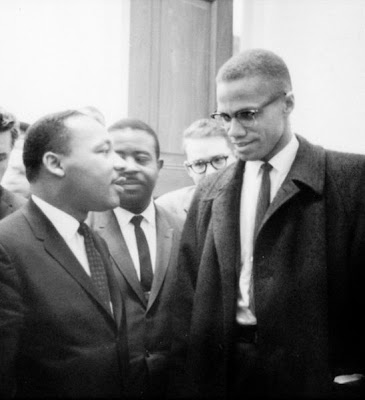 Martin Luther King, Jr.
Top: Delivering his address, "Beyond Vietnam," at a "Clergy and
Laymen Concerned ..." antiwar rally, Riverside Church, Manhattan,
April 4, 1967--one year, to the day, before his assassination.
Bottom: With Malcolm X, March 26, 1964--11 months before Malcolm's
assassination. The two leaders' paths had already begun to converge.
Following his conversion to Sunni Islam and his pilgrimage to Mecca,
Malcolm adopted the racial inclusivenesss of King's approach. For his
part, King came to adopt more of Malcolm's willingness to oppose and
confront established power including the national government--as we
can plainly hear in his great speech at Riverside Church. IMHO, this is
King's finest speech.
Each man died at age 39. In each case, elements of the National
Security State either connived in the assassination (Malcolm) or else
pulled the trigger (MLK).

Posted by Kenneth Dowst at 4:23 PM

I don't know if your comment is legible at your end. As it reached me, I can see only dots and rectangles. Apparently either Blogger's server or my computer is missing the character-set needed to make your comment readable at this end! (If the language you wrote in is not English, that presents a second problem ....)

If you'd give it another try, I'd be glad.