This week in New World Notes, #56* -- March 17 & 20:
The third and final part of the documentary on the news media's bias in reporting on Palestine airs this week. The blog entry--actually pair of entries--is a photoessay about certain similarities between Germany's policies concerning Poland (1940-1943) and Israel's policies concerning Palestine (1967-present). You are reading the first of the photoessay's two halves. In this half, the click-to-enlarge function does not work; in the second half (= next blog entry), click-to-enlarge does work. To reach the second half of the photoessay, scroll upwards.
Introduction
"According to [UN Special Rapporteur Richard] Falk, 'A recent study reports that 46 percent of all Gazan children suffer from acute anemia. There are reports that the sonic booms associated with Israeli overflights have caused widespread deafness, especially among children. Gazan children need thousands of hearing aids. Malnutrition is extremely high in a number of different dimensions and affects 75 percent of Gazans. About 18 percent of Gaza's children have stunted growth. There are widespread mental disorders, especially among young people. Over 50 percent of Gazan children under the age of 12 have been found to have no will to live. . . .
"'It is macabre,' Falk said of the blockade. 'People have been referring to the Warsaw ghetto as the nearest analog in modern times.'"
-- Chris Hedges, from "Party to Murder," condensed by KD. http://newworldnotes.blogspot.com/2009/01/on-gaza-and-israel.html 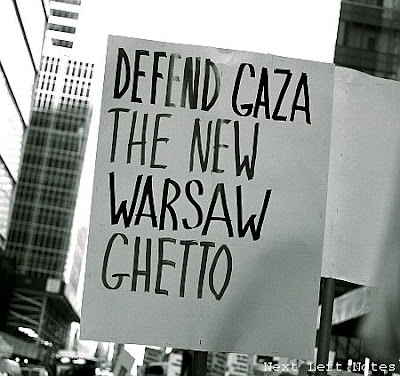 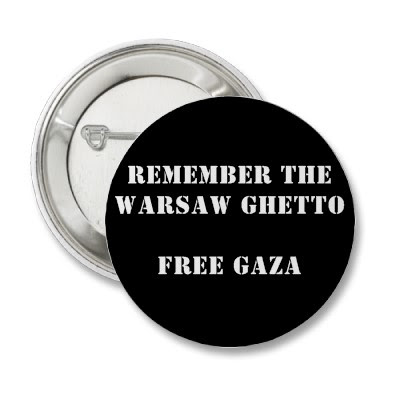 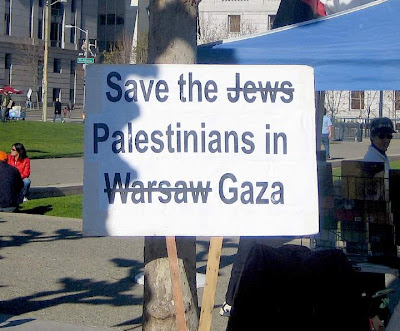 The walls of the Warsaw ghetto--erected by the Nazi authorities beginning
1940--enclosed not only the olive-colored areas but also the orange area
and the Jewish Cemetary. Mila Street (in the orange section) was made
famous in the U.S. by Leon Uris' popular 1961 novel, Mila 18 ("18 Pleasant
Street," in English). Not to be confused with Milah 18, which would be "18
Circumcision Street." Mila 18 is was the address at which SS troops killed
the last of the resistance fighters, ending the Warsaw Ghetto Uprising.
The forces of Law and Order were led by SS Major-General Juergen Stroop
(likely pronounced "Schtrope"). The insurgency began in mid-January 1943;
the period of most intense fighting was April 19-May 16.
A pedestrian bridge over Chlodna St. connects the "Little Ghetto" in the south
with the "Large Ghetto." That part of Chlodna was not crossed by a wall, as
authorities did not wish to disrupt the (Gentile) streetcar line running along
the street. 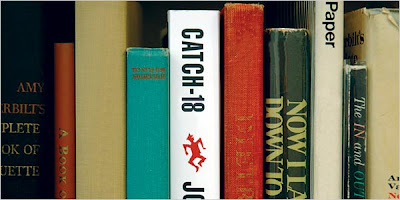 Trivia (or not): 1961 also saw the appearance of Joseph Heller's first
novel, Catch-18. Mila 18 soon became so well-known that Heller's editor
at Simon & Schuster decided that a post-publication change of title--by the
newbie Heller, not by the established Uris--was called for. What to call
the damned thing? Catch-11 was too close to Ocean's 11 . . . . Could I
make this stuff up? Now everyone agrees that Catch-22 is the best title
imaginable for the book. See http://www.independent.co.uk/arts-entertainment/books/features/the-stories-behind-some-of-literatures-bestknown-novels-760449.html 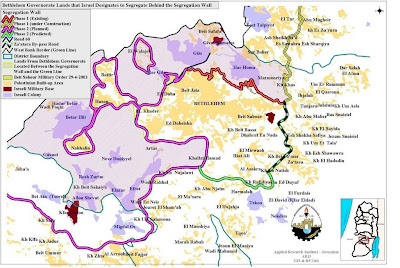 The German occupiers of Poland were not the only force to see the
advantages of a nice wall. The Israeli occupiers of Palestine concur.
Here is a map of Israeli enclosures, encroachments, ethnic cleansing,
and future Anschluess of just one region: the Bethlehem District of
the West Bank.
Key to Map
Colored areas: medium violet = Israeli colonies; light violet = land
between the segregation wall and the West Bank border; dark red =
Israeli military bases; yellow = Palestinian built-up areas.
Thick lines: red = existing wall; yellow = wall under construction;
magenta = planned wall; green = predicted wall; dashed green/
black = bypass road. Thin blue-green line: boundary of Bethlehem
District.
Walls
If the wanton destruction of Gaza recalls the Warsaw Ghetto of 1943, the building of confinement walls by the occupying forces recalls the Ghetto of 1940-41. Credit where due: the walls the Nazis ordered built in Warsaw were easier on the eye than those that others put up in Baghdad and throughout Palestine--being built of brick and to a more human scale. 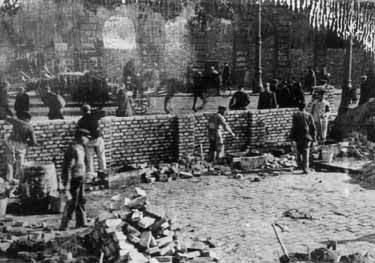 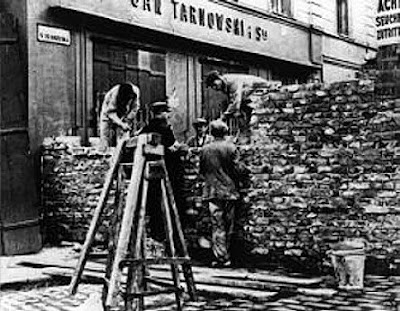 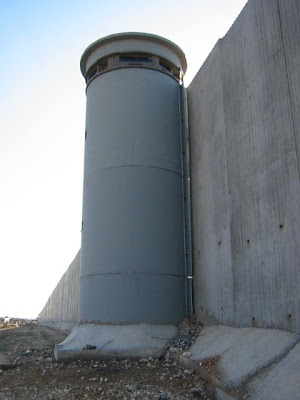 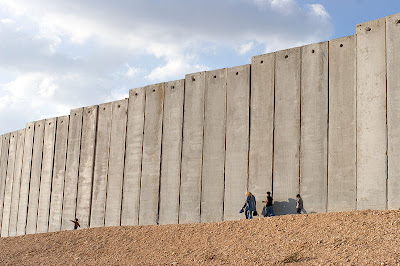 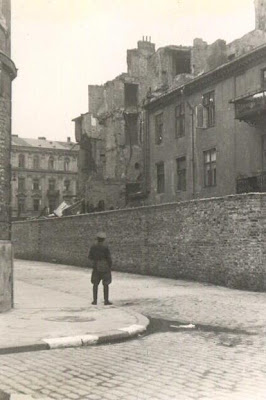 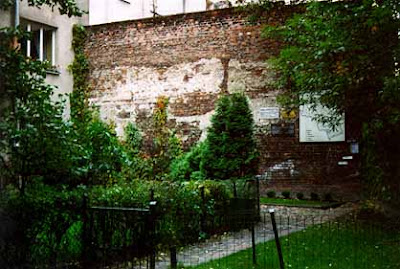 Only remaining German-built section of the Warsaw Ghetto wall. 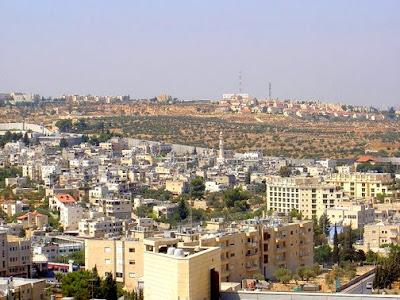 "O little town of Bethlehem, how still we see thee lie." Well, actually,
from the north we can't see much of thee at all. Except by Apache
helicopter and perhaps from the hilltop that is now part of an Israeli
colony--which CNN insists on calling a "Jewish neighborhood." Note
how the wall cuts the olive orchards off from the town. The hopes
(Israeli) and fears (Palestinian) of all the years are met in thee tonight! 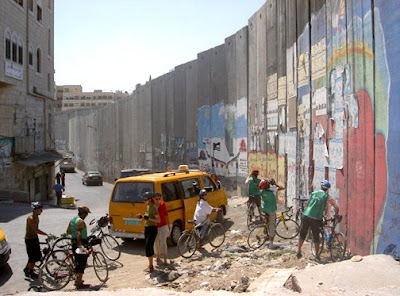 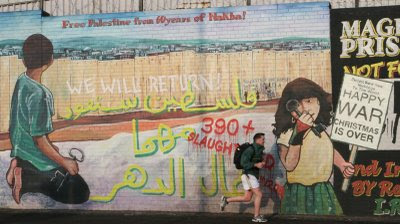 Belfast, Northern Ireland, U.K. U.K.-ians say "Happy Christmas,"
not "Merry. . . ." Who would have imagined that the Protestants and
the Catholics of Northern Ireland could ever live together in peace?
Fire & Smoke
Warsaw, 1943 -- Gaza, December 2008-January 2009 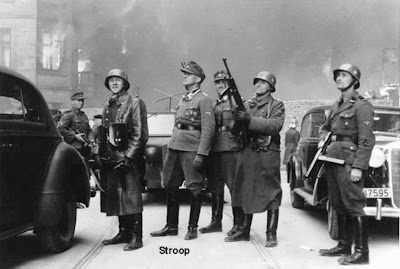 SS Major-General Juergen Stroop was placed in charge of
eradicating the Jewish insurgency in Warsaw and razing the
Ghetto. After the war he was sentenced to death by the
Nuremberg Tribunal, extradited to Poland, then tried, convicted,
and executed by Polish authorities. 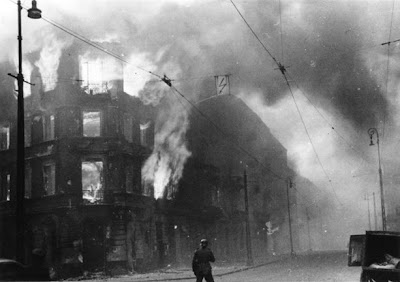 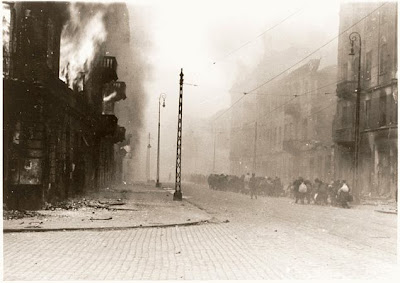 Marched off to the Umschlagsplatz (railroad freight loading area)
just north of the Ghetto; thence to Treblinka.

Propaganda Minister J. Goebbels was one of the greats of the P.R. industry, but he wasn't perfect. It didn't occur to him to explain, "We had to destroy the Ghetto in order to save it!" --paraphrasing an obscure U.S. Army major's remarks on the village of Ben Tre, a generation later. Righteous outrage at the Warsaw inferno should be expressed cautiously by citizens of the country that intentionally torched Dresden and Tokyo at roughly the same time Stroop was burning a good deal of Warsaw.

Wait. . . . My photos are all mixed up! Is this a shot of Warsaw (just above), or is this one of my photos of Tokyo? Dresden? Beirut? Fallujah? The electrical hardware looks too old for this to be Gaza City, and I don't think Ben Tre had electricity. 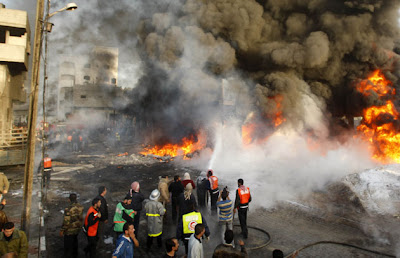 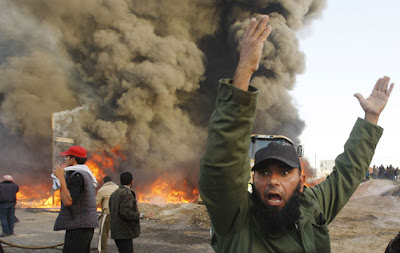 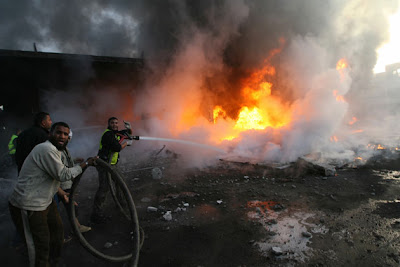 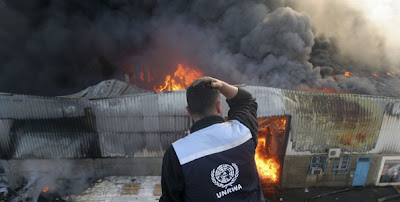 * NWN installment #55 will be broadcast next week (if God permits).
Photoessay continued in next entry . . .