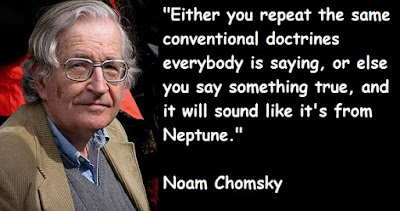 North Korea and Syria--what to do? Noam Chomsky reveals some not-well-known facts about the situations, and he makes some intelligent suggestions for wise and humane action by the U.S.

As usual, Chomsky's analysis is a refreshing alternative to the belligerent cliches recited by government spokespersons and the corporate-controlled media.

Chomsky spoke two years ago--responding to questions posed by Amy Goodman. His words are just as powerful and just as relevant today.

Chuck Rosina recorded the talk live in Cambridge, Massachusetts, on April 24, 2017. His complete recording is available on radio4all.net.

Posted by Kenneth Dowst at 6:51 PM