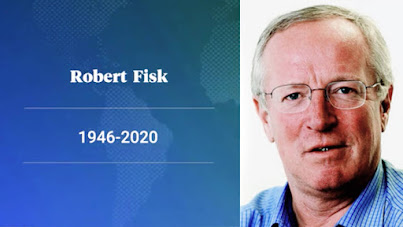 Robert Fisk, who died on October 20, was one of the finest foreign correspondents writing in English. For decades his beat was the Middle East. To mark his passing, we reprise one of his few appearances on New World Notes, in this installment from February 2019. Also featured is former foreign correspondent Chris Hedges.
Different in style, the two reporters are alike in their hatred of lies and propaganda, their command of recent history--and their disdain for Trump's presidency.
Fisk discusses the war in Syria, Iran, Putin, Trump, and the flood of propaganda in the media. Hedges discusses how social justice requires economic justice and also effective means of nonviolently overturning established power.
With an updated introduction by KD. Plus a song by Yikes McGee. 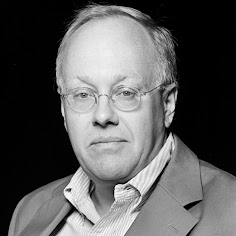 Chris Hedges
Chris Hedges' recent book is America: The Farewell Tour (2018).
Many thanks to Jeff Blankfort, host of "Takes on the World," for these selections from his interview with Robert Fisk (June 13, 2018). Hedges' remarks are from the Q&A following his talk, "America: The Farewell Tour" (New York City, December 8, 2018), broadcast in NWN #571-572.
Thanks again to Wilton Vought--then of "Other Voices, Other Choices," currently of "Essential Dissent"--for re-engineering and making available the audio of Fisk's talk. "Essential Dissent" can be found at several places on the Web including YouTube, Facebook, iTunes, and radio4all.net .
Posted by Kenneth Dowst at 10:29 PM