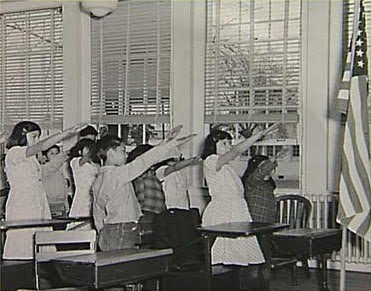 One of my favorite mental images comes from Eric Klinenberg's talk on Media Oligopoly, from the 9th installment of New World Notes (April 2008). Klinenberg told how a Christian anti-smut organization and Move On (I think it was) and the National Rifle Association and Code Pink for Peace all joined together to fight some horrific rule-change or other that the Bush-era Federal Communications Commission was proposing.

Can’t you just picture the table? . . . with (the late) Charleton Heston, for the NRA, in leather boots, jeans, and cowboy-plaid shirt, sitting next to Code Pink’s Medea Benjamin, in a pink Tee and (just to unsettle her right-wing opponents) pearl necklace?

I can picture Medea and Charlton--between rounds of plotting tactics to stop the government from “privatizing” all the airwaves--chatting and discovering they’re both fans of, say, singer Iris Dement and the Green Bay Packers. And, more importantly, discovering that they share more political beliefs than they had imagined. And discovering that they and the organizations they represent can work together effectively on matters of common concern. 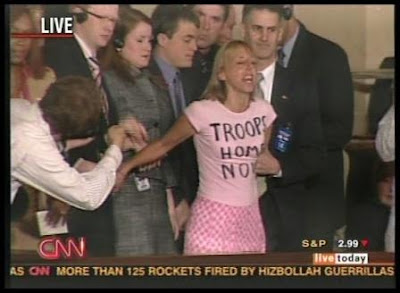 Medea Benjamin, being ejected from a joint session of Congress
after giving advice to Iraq PM Nouri al-Malaki, July 30, 2006.

Every bit as much as those we refer to as “right-wing crazies” do, we left-of-center types demonize those we see as our opponents and then turn them into cartoon stereotypes. Not even real demons but cartoon demons!

So I like the image of Medea and Charlton getting to know and respect each other--and the grassroots organization that the other heads or headed. Some day I’m going to do a show on gun-control and the NRA that--in the unlikely event that all goes according to plan--will get listeners to question which side has the sane, sensible people and which has the wild-eyed crazies. 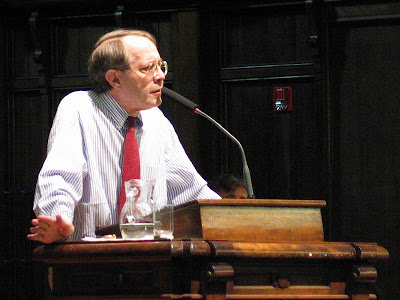 For now, though, let’s look at an even stranger set of bedfellows than Chuck and Medea. Teachers / scholars of education / educational theorists John Taylor Gatto and Jonathan Kozol are (apart from their life’s work!) two peas from very different pods.

Gatto was brought up in a steel-and-mining town near Pittsburgh, educated (or “schooled,” as he would say) in small-town public schools in the region and one Catholic boarding school, served in the army, attended graduate schools, and eventually became a schoolteacher in New York City. 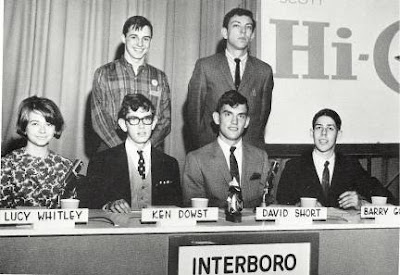 That Gatto and Kozol disagree on several points is hardly surprising. More surprising is how much they agree on. Here’s a quick comparison-and-contrast:

Public persona (after Gatto):
Gatto: adult
Kozol: child-like (= praise, of a sort) but not child-ish

Overall nature of his critique (after Parenti):
Gatto: a "radical analysis"
Kozol: a "liberal complaint"

Summary judgment of public schooling:
Gatto: all-too-successful at doing the evil things it was designed to do
Kozol: a failure at educating children & empowering citizens 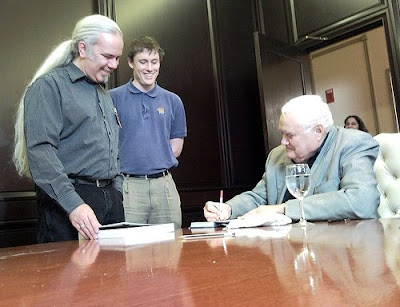 Fascinating stuff. This week we present Part 3 (the conclusion) of the long talk John Taylor Gatto gave in late 2003, and we present an introduction to Jonathan Kozol through excerpts from a talk that he gave in, I believe, 2006. I hope you’ll find the similarities between the two as interesting as I did.

It wouldn’t hurt if you had heard the previous installments of Gatto’s speech (NWN #72 & 74). If you want to, and have an hour to spare, by all means help yourself! Just scroll down to the blog entries for July 10 (#72) and July 26 (#74). Each entry has a link or 2 to the sound files. But I think you can also begin with this week’s episode, which starts with a review of Gatto’s main ideas.

We’ll hear more from Kozol at a later date.

Posted by Kenneth Dowst at 5:00 PM