Can Technology Save Us? 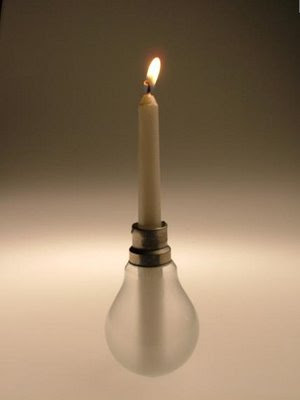 Did you hate Day of the Jackal because you knew that the plot to kill DeGaul would fail? How about The Greatest Story Ever Told? Did you ever think there was even a chance that Jesus would plea-bargain the charge down to Practicing Medicine Without a License and get off with "time served"?

This week's installment of NWN is about the near-future Critical Petroleum Shortage. Its title is, Can Technology Save Us? And you already know the answer--better than the U.S. Department of Energy does (or pretends to).

On one of its Web pages the DOE has a breathless account of how hydrogen will keep our SUVs running throughout the forseeable future. No lifestyle changes required! 50 years from now, the grapes sold in New York State will still be grown in Chile and shipped northwards economically. And if the U.S. has any jobs available other than currency arbitrage, you can still drive 50 miles to work!

Right. And thanks to nuclear energy, electricity will be so cheap to produce, they'll just give it away. Industry flacks were actually saying this in the early 1960s. I remember. So it must be true. 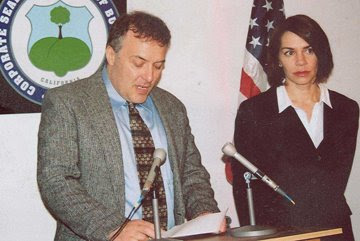 Two nuclear-industry P.R. flacks explain the benefits of Clean
Energy For Tomorrow ... Today! Oops, wrong picture. This is
actually Jello Biafra (left), playing a Zombie mayor, in a scene
from the major motion picture, RetarDEAD. The lady on the
right looks a bit un-dead, too.

Don't worry about the fact that it requires so much fossil fuel to produce enough hydrogen to drive 100 miles that you'd save energy by burning gasoline instead. Scientists will surely solve this problem Real Soon Now. Look how well they solved nuclear waste disposal!

This week's show presents two funny and intelligent views on why high-tech won't forestall the disruption that Peak Oil will cause.
Jello Biafra addresses the matter indirectly by discussing--with a good deal of wit--the down-side of two "new technologies" that many expected to enhance personal freedom and transform the world: cell phones and especially the Internet. Thanks in part to these technologies, we now have less freedom and more social alienation.

Then urban-design theorist James Howard Kunstler tells of his unhappy but funny failure to get Silicon Valley "genius dudes" (at Google) to comprehend that technology cannot replace energy. You can turn petroleum into jet fuel or into Ipods. But you can't turn Ipods into jet fuel. Like, sorry, Dude! 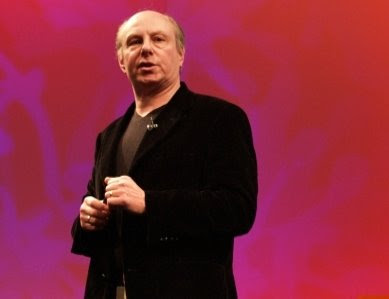 Which brings us back to Jesus. Or rather, to Monty Python's Brian . . . on a hilltop in Palestine, crucified along with several other culprits, all singing "Always Look on the Bright Side of Life!" as the camera slowly pulls back and the closing credits begin to roll.

So this installment takes these folks' advice by viewing the impending breakdown of what now passes for civilization with a certain amount of humor and good cheer. 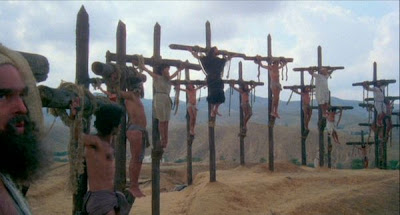 By the way, WHUS broadcast this installment on April 3. As they say, consult station listings for the installment they'll broadcast on April 10. (You won't find the answer, but you might find some additional shows you want to check out!)

On April 3, I delivered a paper at a conference--Teaching Peace Across Disciplines: Strategies of Peace, Global Sustainability, & Conflict Transformation--held at Central Connecticut State University. It was sponsored by 4 NGOs and 3 local colleges/universities including WWUH's gracious host and licensee, the University of Hartford. I met some really interesting people there and expect some of them will speak on future installments of NWN.

My talk was titled, "Composing Language, Promoting War, Creating Peace." Complete with photo ("slide") illustrations & 10 pages of handouts. OK, I overdid it a little. The whole shebang was based largely on what I learned while putting together NWN's four recent shows--and four blog entries/newsletters--on media distortions of the Israel-Palestine conflicts.

It's rare that I find cause for optimism . . . but encountering a handful of young, educated, enthusiastic graduate students and young professors committed to making positive change in the world . . . . As we used to say, 'way back when, What a blast from the past! A little good news! . . . The first since November 4. . . .

Posted by Kenneth Dowst at 2:34 PM