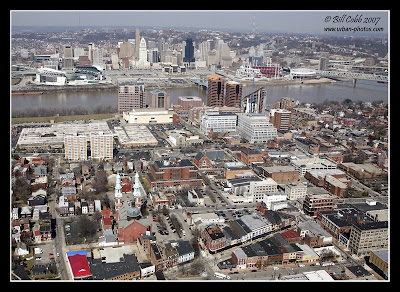 In this week's installment, Shepherd talks a lot about Covington, Kentucky. Here it
is (foreground)--looking northwards toward the Ohio River and Cincinnati, Ohio.
(Click photo for larger image.) Madison Avenue, where Shepherd lived,
runs from the lower-right corner to the river. Shep says he lived two blocks from
the river. Alas, the Wheel Inn diner appears long-gone. The round and surprisingly
gray twin towers of Procter & Gamble's world headquarters can be seen beyond
Cincinnati's red-and-white baseball stadium. Covington is a city of bricks--as are
its fellow river-towns Pittsburgh (upstream) and St. Louis (downstream).

In contrast with George Carlin and Jello Biafra--both heard recently on this show--Jean Shepherd created humorous spoken-word-art that seemed almost devoid of political content. Theoretically, this isn't possible, but darned if I can figure out even what his political assumptions are.

He liked to show the foibles of Americans and of 20th-Century American culture. Did he want to change anything? I dunno. Did Picasso? 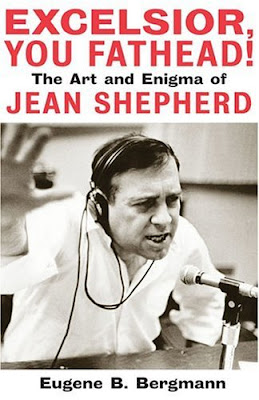 Said to be a good book on the subject.

For 21 years, late at night, he'd lean into a microphone at WOR radio in New York and deliver a loosely-structured 45-minute narrative. It sounded like a shaggy-dog story. Later you'd begin to see how every element of the story was beautifully connected. Well, lotsa elements were, anyway . . . including scripts for commercials that he was supposed to read verbatim but never did. I'll always remember a commercial he delivered for the French automobile brand Peugeot. It ended (approximately), "Don't even think of buying a car until you've had a chance to test-drive the new Peugeot. That's spelled P-O-O-J-O-E. Peugeot." 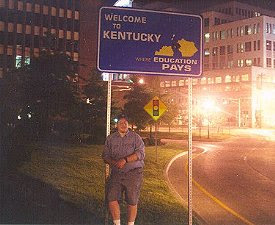 Covington at night. What could be more American than that sign?
Why is education good? Because it gets you money! 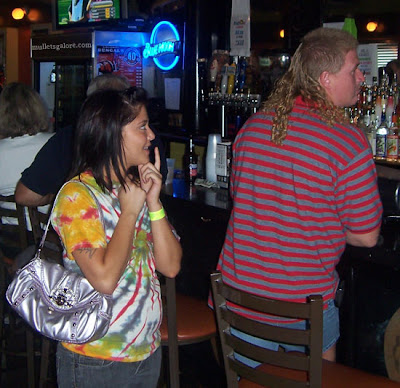 Covington night-life: admiring "mullets" at the Blue Moon Cafe.
See mulletsgalore.com for more creative hair-styling ideas.
This week, NWN will play a substantial portion of Shepherd's broadcast of October 28, 1965. I don't want to spoil the story for you, so I'll give only some general listening advice. Two themes are important. The first is ordnance (e.g., hand grenades, guns, and whatnot). The second is that an event as you experience it seldom resembles the same event as the media depict it.

For me, the highlight is Shep's recreation of Covington, Kentucky, in the 1950s. Covington is a poorer, louder, and wilder version of genteel Cincinnati, Ohio--which lies just across the Ohio River. If you understand Covington, you understand America. 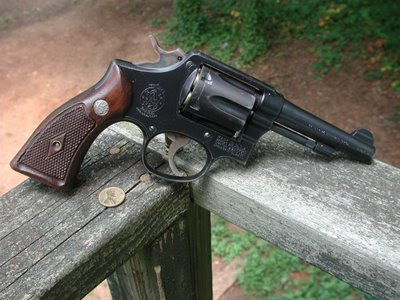 What sort of "roscoe" did Claire employ? In the 1950s, revolvers were much
more commonly used than semiautomatics, outside the military. I'm betting on this
period (1953) Smith & Wesson "Military & Police" model chambered in .38 Special.
Full-sized, yet compact enough to fit into a ladies' handbag.

Note: I had to discard about half of Shepherd's monologue. What remains amounts to a good introduction to Jean Shepherd's art; and Shepherd's show works well, as condensed. If you like it, why not try some in their original form? Radio Veronica (U.S.) has restored, and made available for free download, fourteen 45-minute episodes, here: http://www.radio4all.net/index.php/series/Jean+Shepherd+Rewound. NWN #52 is taken from Program #2 in this series. 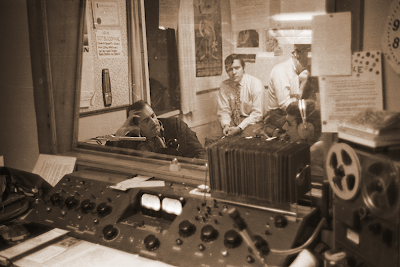 Shepherd (left) visiting the studios of WITR, at the Rochester Institute of
Technology, fall 1968. An interview may be in progress.

A better essay than this one: 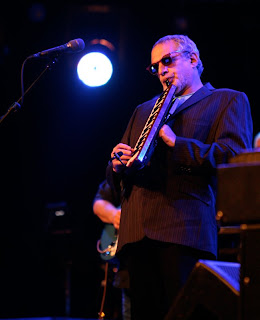 Musician Donald Fagen (left: click to enlarge), co-founder of Steely Dan, has written a subtle, complex, and very personal appreciation of Shepherd--who had played as large a role in Fagen's early adolescence as Mad magazine played in mine. It was the same role, too, and with the same qualities: sanity-preserving, reassuring, necessary, and ultimately flawed and inadequate. (Sounds a little similar to New World Notes, no?)

Fagen's writing abilities are on a par with his musical abilities. This fine essay should interest anyone who was a bright and alienated suburban kid or who is interested in Jean Shepherd's "word jazz"--as Fagen aptly names it (pace Ken Nordine). The essay is here: http://www.slate.com/id/2207058/pagenum/all/#p2

Posted by Kenneth Dowst at 9:35 PM