The Things They Don't Tell You! 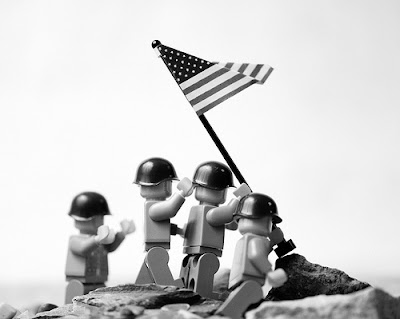 As a school subject, American History is unique in one respect. The more you've studied it, the dumber you are--that is, the less about the subject you know correctly. So states James W. Loewen, a professor of sociology at UVM, citing a pile of published research studies. Even odder, UVM stands for University of VerMont (some say). The state university here in Connecticut tried something similar once, UCNIC--University of ConNectICut--but it didn't catch on. The NIC sounded too Soviet (cf. Sputnik, peacenik).

Some claim that the M in UVM stands for at Montpelier. As Daffy Duck used to say, this is a canard. Some (see first Comment to this blog entry) go so far as to claim UVM stands for
Universitas Viridis Montis. If my Latin serves, this means either "The most virile Mountie in the Universe"--obviously a Canadian TV contest-show for beefcake fans--or else "University of the Green Mountains." Take your pick. IMHO, one makes as much sense as the other. 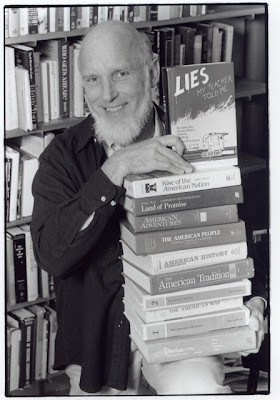 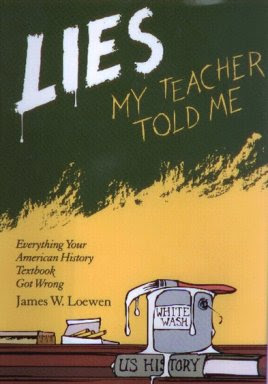 A new edition of James Loewen's study of school American History courses and textbooks is out--Lies My Teacher Told Me--and in a radio interview Loewen tells funny, interesting, and occasionally depressing stories of what he discovered in researching the book.

American History courses present every character as a spotless hero (save possibly Lee Harvey Oswald); show Progress as always in action; say nothing negative about any public figure; take care not to offend any potential purchaser; won't touch sex, religion, or social class with a 10-foot pole; and seem more interested in turning students into flag-waving patriots than into well-informed, critical-thinking adults.

Think of the textbooks you once used. Which subject had textbooks with a grandiose title? Let's see. . . . There was Principles of Chemistry. Algebra I. Introduction to English Literature. Basic Spanish. And--with the red, white, & blue cover depicting the waving flag--Triumph of the American People. That would be the History textbook, right?

Loewen notes that no Chemistry textbook is named Triumph of the Molecule. 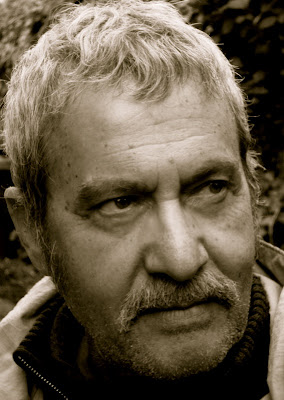 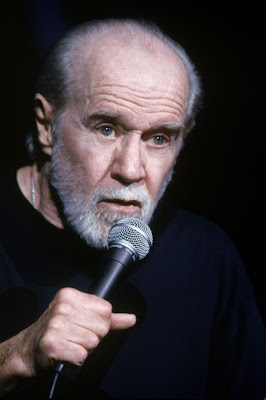 Loewen's indictment of how we teach history is terrific. But he stops short of considering seriously why the books and courses are the way they are. In Michael Parenti’s useful terms, Loewen constructs a liberal complaint, not a radical analysis. So the installment supplements Loewen’s talk with a few recorded words by Parenti and by George Carlin. Each of this pair argues that mediocre, flag-waving public education serves the economic and political interests of certain powerful elites.

The Loewen interview is snipped from a recent installment of a very interesting radio program, History Counts. It’s produced in Connecticut by Ken MacDermotRoe and broadcast twice a month by community alternative radio station WPKN, in Bridgeport. You can catch WPKN’s broadcasts on the Internet (http://www.wpkn.org/). Even more conveniently, you can listen to History Counts at any time online or download a free copy in .mp3 format. The blog you're now reading has a link to History Counts's Web page near the top of the gray sidebar. 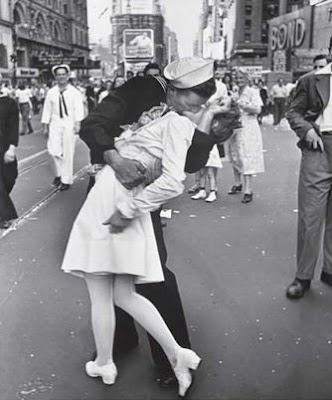 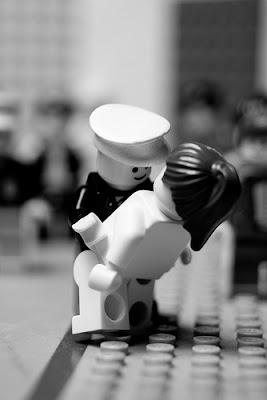 Posted by Kenneth Dowst at 3:00 PM

Hi, Lyn. Always good to hear from you!

I was just kidding about U. of Connecticut being abbreviated as UCNIC (and UVM as short for University of VerMont). But your suspicions were correct: I had no idea what "UVM" stood for!

Many thanks for the gloss. I'll include it in the newsletter version of my essay.